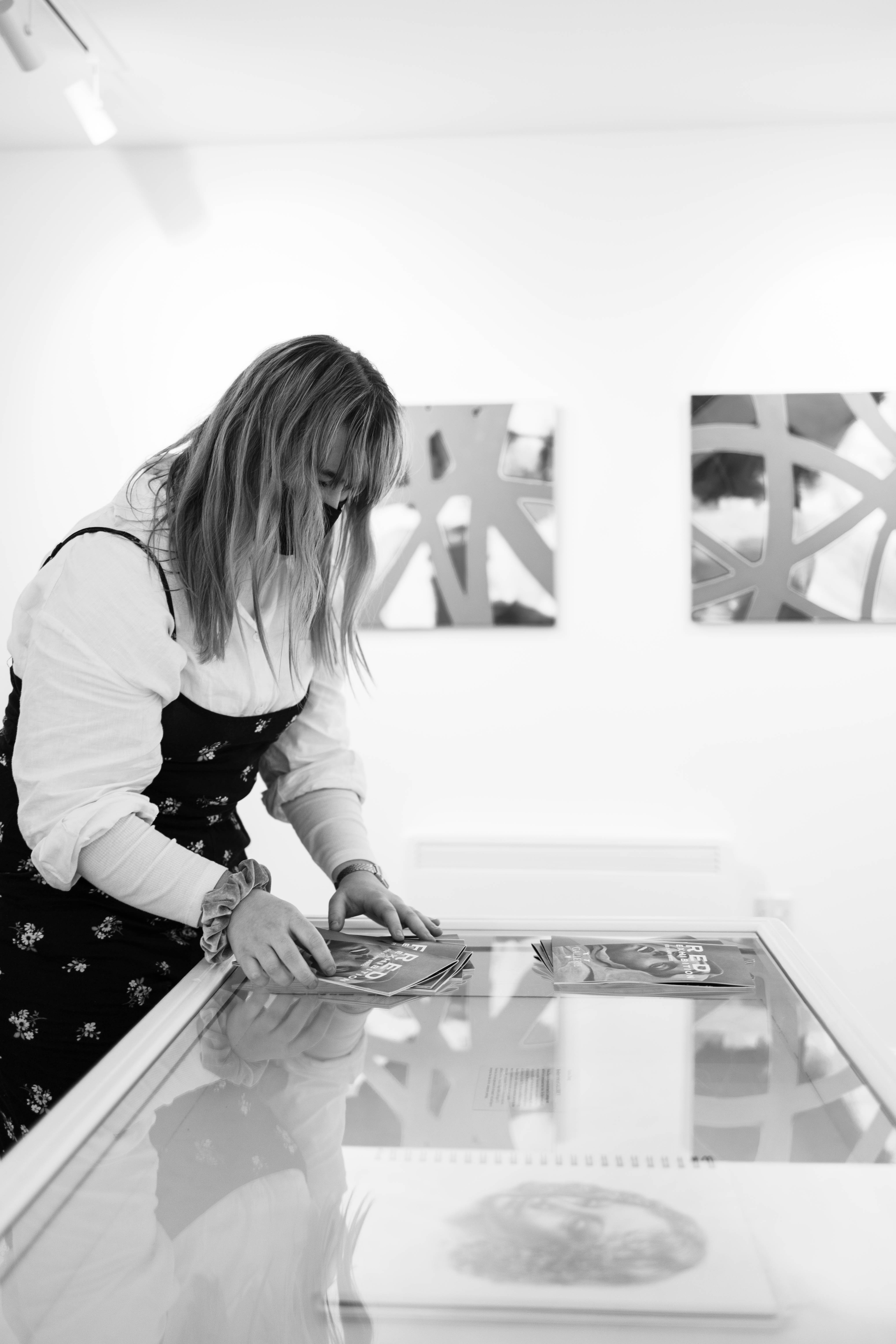 Molly Cawthon is an English artist and creative passionate about the environment, as well as the accessibility and diversity of art.

She studied English Literature and Fine Art at Aberystwyth for her undergraduate degree and went on to study for her Master's in Fine Art.

After moving to Cambridge she expanded her art style and searched for career interests. Molly now works with multiple galleries as a consultant, as well as running workshops, and producing her own art, and websites.

No exhibitions are on at the moment. Have a look at Molly's portfolio.

​​Molly is a mixed media landscape specialising in acrylic, ink, and charcoal.

Her abstract style began with her "Diaspora Vapor" series. This is a collection of works that aims to further the research, experiments, and ideas initially explored in a previous series “Dyfed Forests" for an MA graduate show.

By working in monochrome, Molly assesses and manipulates mixed media to create an image that concerns the concept of space and distance, balanced by paths within macro-micro compositions inspired by the landscape.

By utilizing tone in a minimalist colour palette she creates shapes reminiscent of mountains, trees, and waterfalls: all of which are primary motifs of Chinese and Japanese images of nature.

​​The concept of diaspora has appeared frequently in her research and recently became apparent during her move to Cambridge from Wales. The sensation of feeling mixed by experiencing a change in landscape or settlement has affected artists for generations: from the movements within the Asuka and Nara periods in Japan to late 20th century China, the innate and somewhat “caveman” instinct to long for one’s homeland resonates with me.

When she moved from Wales – a landscape surrounded by mountains and sea – to Cambridge in South England, the contrast in the landscape was glaring. Cambridgeshire is flat for miles, it is encompassed by fens and rivers and breaks records for high temperatures in the UK, penetrating the shade from abundant forests.

During this resettlement process, Molly has attempted to capture the nature of diaspora and the feelings it inspires and causes: negative and positive. She considers connotations and how they balance within a composition in an abstract space containing remnants of the Welsh landscape prints, Chinese calligraphy, the Japanese's sense of distance, and the metropolitan atmosphere of Cambridge and its forests. By capturing the essence of a memory, the choices we make, and the paths we choose, literally and figuratively, Molly hopes to inspire viewers to enter into the landscapes she has created and feel like they are following or beginning a journey themselves. In her most recent work "Diaspora Vapor" and "Anglia Vapor" (2022) she continues to explore her relationship and knowledge of colour whilst considering distance and the place of the viewer. In her search to include mixed media, Molly has furthered her process in Adobe Fresco, glass, and collage to continue to create “vaporscapes” made up of a variety of materials and mediums, furthering the layering process. The next stage for this series is to complete an installation one can physically travel through.

Molly also creates realism charcoal drawings, which help her to decide on composition for her abstract and semi-abstract works.